Prof. Dr. Dr.hc Horst-Günter Rubahn, chair of PCAM, a European PhD network of 14 universities from 9 countries, took the honour to announce the first Gian Paolo Brivio award to a very talented young researcher. He emphasised that we owe this award to Gian Paolo Brivio’s widow, Dr. Angela Giorgetti Brivio, and the Istituto Lombardo in Milano.

The award is named after Gian Paolo Brivio, founder of the PCAM network and an inspiring scientist and colleague who passed away in 2020. The underlying idea of the PCAM network is to support the scientific education of young scientists and the development of their career in a European context, taking advantage of the ‘variety of traditions and cultures’ in Europe, which ‘is a unique intellectual capital of Europe to be preserved, emphasised and strengthened’ as Gian Paolo Brivio wrote already in 2010.

In a strong field of applicants for the award, three candidates managed to excel, Dr. Sara Grecchi and Dr. Mindaugas Juodenas – who obtained a special mention – and Dr. Giovanni Di Liberto – who obtained the first GPB award. The international award commission unanimously formulated as motivation: ‘For the advanced research and results obtained in the field of photo- and electrocatalysis aimed at mitigating environmental effects.’ 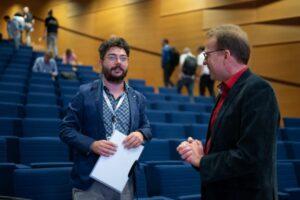 Dr. Giovanni Di Liberto is, at present Assistant Professor at the University of Milano Bicocca in the field of Theoretical Chemistry. Whereas the award was announced in front of all attendees of the European Conference of Surface Science (ECOSS 35) in Luxembourg, Giovanni Di Liberto presented details of his research on the computational study of semiconductors with applications in photocatalysis in a well-attended specialist session of the conference.

With the award follows an amount of 5000 Euro.

You can find out more about which cookies we are using or switch them off in settings.

This website uses cookies so that we can provide you with the best user experience possible. Cookie information is stored in your browser and performs functions such as recognising you when you return to our website and helping our team to understand which sections of the website you find most interesting and useful.

Strictly Necessary Cookie should be enabled at all times so that we can save your preferences for cookie settings.

If you disable this cookie, we will not be able to save your preferences. This means that every time you visit this website you will need to enable or disable cookies again.